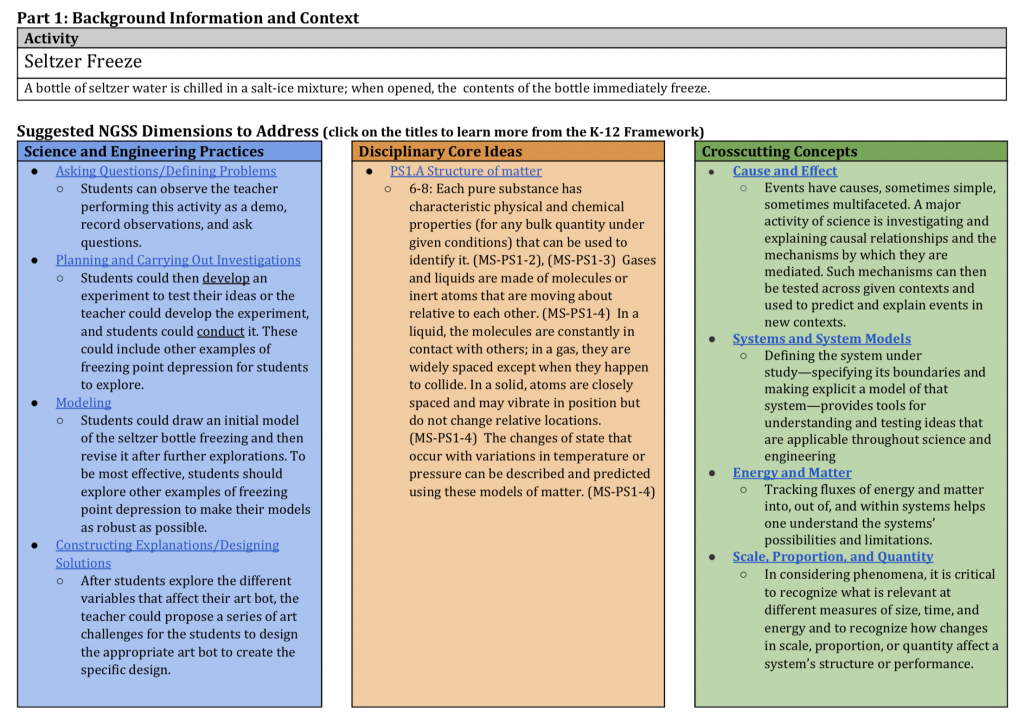 Click here for PDF
PK – grade 3 students At this level the students can be asked about different physical states of matter. They can be asked to give examples of solids, liquids, and gasses. They can also be asked if they know how to change one state to another. Then, they can be asked about what they observed during the experiment. What phase change took place? Why did it happen? Also, the students can be asked what makes the soda bubbly. Thus, at this grade level teachers can focus the experiment around states of matter. They can describe the states of matter, their properties, and what it would take to change them from one state to another. Grade 4 – 6 students At this level the students will have already been introduced to, and have learned about the scientific method. Most of them will have also already conducted experiments in various science courses. So, ask them to go through the steps of the scientific method for this experiment. What happened to the soda when it was placed in the ice bath? How did the CO2 keep it from freezing long before the bottle was open? Have each student make their own observations and ask their own questions, and then allow them to draw their conclusions based on how they followed the steps of the scientific method. Middle school students At this level, students will have had some more science courses, and topics such how a phase change can occur can be discussed. A solid becomes a liquid when heat is added via melting, and a liquid becomes a gas in the presence of heat due to evaporation. A gas can also go back to being a liquid through condensation. To go a little further a solid can go straight to a gas through a process called sublimation, and a gas can become a solid via deposition. The last couple terms might be a little foreign to the students, but they should still be able to grasp the basic idea, and then they can be asked to explain which processes are occurring in this experiment, and how each component, such as the water and the carbon dioxide, plays a role. Middle school students can gain experience first hand with this experiment. It can easily be replicated in the classroom with the proper equipment, and students can see if they can recreate it. Science Discipline(s) Chemistry Topics States of matter, super cooling, freezing, Carbon Dioxide, instant freezing Activity Title Seltzer Freeze Materials: Instructions: (Note: Start 1 hour prior to experiment) Questions Explanation Next Generation Science Standards Scientific Knowledge is Based on Empirical Evidence Science Models, Laws and Theories Explain Natural Phenomena Science Addresses Questions about the Natural and Physical World Science Investigations use a Variety of Methods Next Generation Science Standards PS1- Structure and properties of matter: LS1-Structure and Function