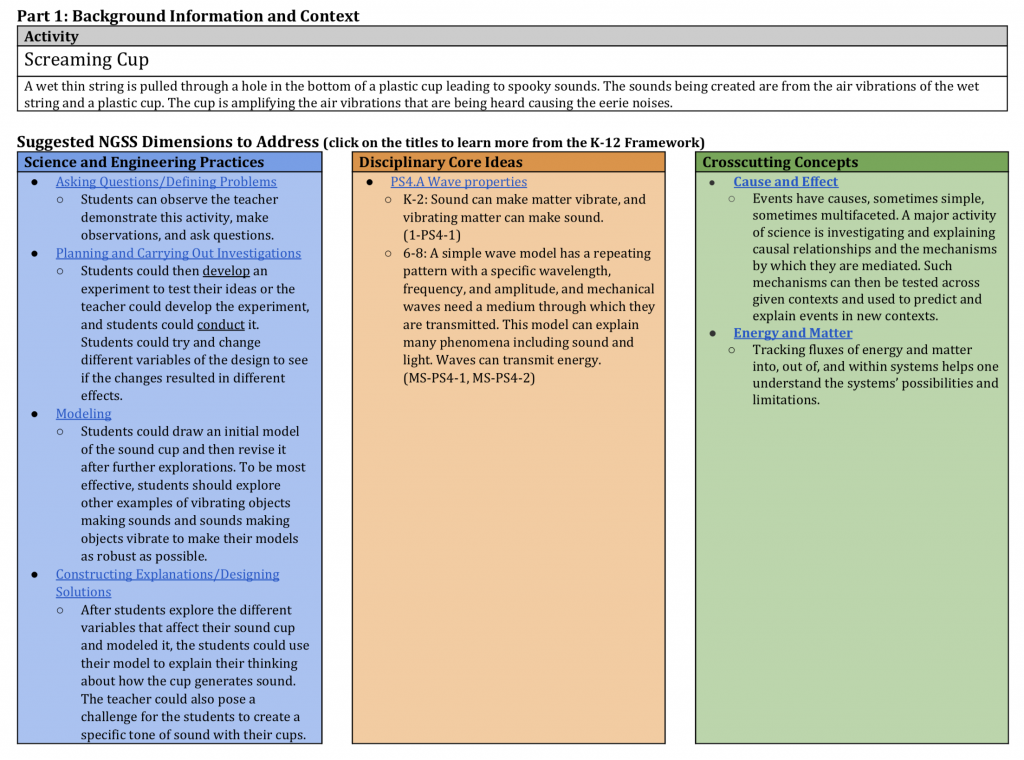 Click here for PDF
Science Discipline(s): Chemistry Topics: Activity Title: Screaming Spooky Cup Materials:  Procedure: Questions: Explanation: Sound waves are being produced when air molecules vibrate, air molecules vibrate when movement occurs. The movement leads to an oscillation in the sound wave, once the sound wave reaches the top of the cup, the sound is amplified and can be heard from the cup, this also supports why a cup is necessary and would not work if it were only the wet string. The string has to be wet and would not work with soapy water, if it were soapy water, vibrations would not occur. Friction would reduce the sounds of the air vibrations. A substitute for water in this activity can be violin rose, violin rosin will still increase the stickiness of the string causing the increase of the vibrations but unlike water, it does not dry out. Another similar activity that demonstrates sound waves is making a string phone. The sounds that are being picked up by one of the cups converts air vibrations across the string reaching to the other end, where a friend or partner can hear what you said. Next Generation Science Standards: This activity can be demonstrated at the 4th-6th grade level; this demonstration is a fun science activity that demonstrates Halloween noises. Students will learn about air molecules and how they travel and create vibrations leading to spooky noises coming out from just a plastic cup. This activity is easy and fast to make. The vibrations can act like beach waves, waves move up and down faster or slower, and the waves can differ in their height, which is also known as amplitude. If waves move up and down faster, then this will create a higher pitch (frequency). If the waves move up and down slower, this would cause a lower pitch sound (lower frequency). If the waves are taller, then the sound will have a louder volume. The role of the cup is to take small amplitude changes in the string and convert them into much louder (higher amplitude) vibrations in the cup. The sound comes out from the help of a wet string, reaching to the very top of the board, it exits; the cup acts as a soundboard. The area of the NGSS that this activity correlates to is 4-PS4-1, where a model is developed and illustrates sound waves in terms of amplitude and wavelength and those waves can cause objects to move. For more information about this activity, visit the below website Make a Screaming Spooky Cup – ages under 11