For this project we will be creating slime but not just any ordinary slime, ours will be magnetic slime! We will mix together all the ingredients until we get the slime-like substance and then have everybody hold a neodymium magnet over the slime and watch as it follows the magnet. The reason that the slime will follow the magnet is due to the magnetic iron oxide inside of it. Iron is ferromagnetic which means it is capable of being magnetized, so when you hold the magnet close to the slime, the iron oxide particles become attracted to it due to the opposing poles. 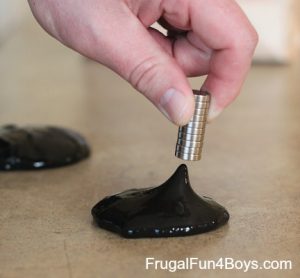