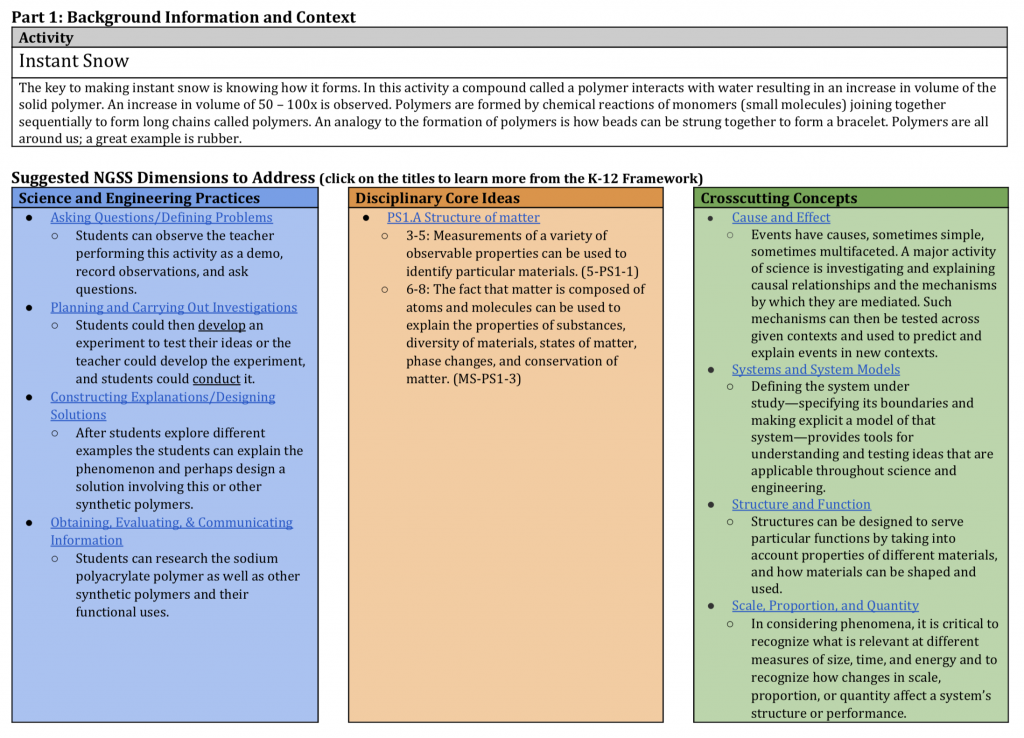 Click here for PDF
Science Discipline(s) Chemistry   Topics States of matter   Activity Title Instant Snow   Materials   Procedure Questions What variables do you think affect the amount of snow that forms in this experiment. How could you conduct an experiment to test the effect of that set of variables? What do you think will be the outcome of that experiment? What is the phenomenon taking place? Is this real snow? Explanation The powder gets hydrated with water and absorbs all the water and becomes a swelled polymer chain looking like real snow. Students will likely indicate that the amount of water and amount of solid Instant Snow will influence the amount of snow that is formed. They could test this hypothesis by placing the solid powder in a dry graduated cylinder and then adding known amounts of water to the solid. They can use the marks on the graduated cylinder to measure approximately the volume of the instant snow and graph the volume of instant snow vs. the volume of water added.   Next Generation Science Standards 5-PS1-2. Measure and graph quantities to provide evidence that regardless of the type of change that occurs when heating, cooling or mixing substances, the total weight of matter is conserved. 5_PS1-4. Conduct an investigation to determine whether the mixing of two or more substances results in a new substance. 5-ETS1-3. Plan and carry out fair tests in which variables are controlled and failure points are considered to identify aspects of a model or prototype that can be improved. MS-PS1-1. Develop models to describe the atomic composition of simple molecules and extended structures.