The Dark Knight Sonolocation Simulator activity demonstrates bats and dolphins use sound to detect prey and other objects, how submarines use sonar to detect other submarines and under-water features, and how some individuals who are visually-impaired can detect their surroundings by using tongue-clicks. An electronic device developed by Dr. Phil Hampton is used to simulate how sonolocation works. Kids wear the Sonolocation Simulator and hear the outgoing click of a Western Mastiff bat in one ear followed by a delay and a return click in their other ear. The time delay between outgoing and return click is longer if an object is further away and shorter if an object is close. Kids search for cut-outs of Batman, Bane, and Batgirl using only sonolocation to tell them whether an object is close or not.

The Sonolocation Simulator can be checked out from CI for use in a classroom setting. 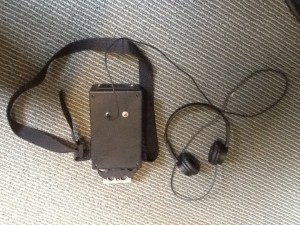