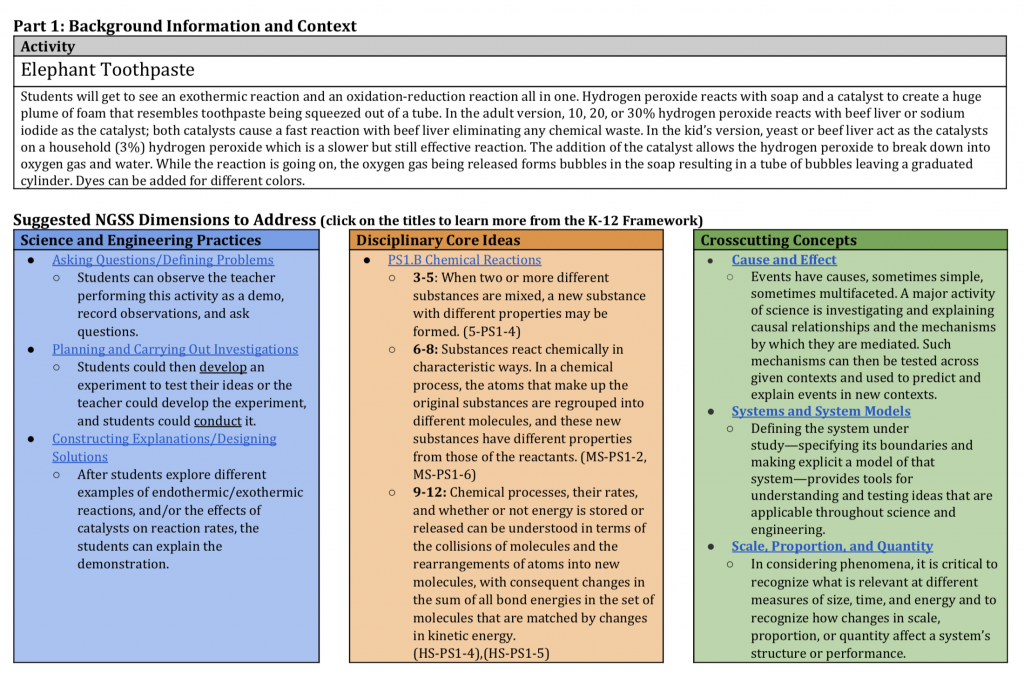 Click here for PDF
This experiment would work well with students from 4th to 8th grade. It covers standards such as energy transfer between the reaction and the environment, how energy can measured in the form of temperature, the creation of new substances from old ones and the properties of different states such as liquid, solid and gas. It also focuses on the use of catalysts and the explanation behind why we use them.   Science Discipline(s) Chemistry   Topics Exothermic reactions, oxidation and reduction reactions, and catalysts.   Activity Title Elephant toothpaste   Materials   Procedure This can be rinsed down the sink afterwards and wiped up with paper towels.   Questions     Explanation This experiment is a reaction between hydrogen peroxide and yeast. First, we add warm water to the yeast to activate it and essentially wake it up so it can work. Then we mix the hydrogen peroxide with the soap, nothing happens at this point because neither is reactive with the other. When we add the activated yeast mixture to the container, it immediately creates a foam that shoots out of the container. During this reaction, the hydrogen peroxide is being broken down and split apart by the yeast, which is acting as a catalyst. The hydrogen peroxide breaks down into water and oxygen gas. To show that the hydrogen peroxide broke down into water and oxygen gas, we add soap which can catch the gas and create bubbles. We use a soda bottle or a triangular flask (known as an Erlenmeyer flask) to force the bubbles out of a small opening that creates a funnel like effect. This funneling action causes the mix to shoot out of the bottle with much more force then if it spilled over a larger rim or area. This reaction also creates steam and heat. The mixture heats up do to the reaction between the yeast and hydrogen peroxide, this means our reaction is exothermic. An exothermic reaction creates heat by shifting energy from the reaction to the surrounding area. When bonds between different atoms are broken or built, the bonds require energy. When a bond is broken, it requires a lot of energy and it will pull energy from surrounding reactions to get it. This means the area around the reaction will cool down because it is losing energy. When a bond is being built. It requires much less energy and thus will release energy that it doesn’t need. That means the surrounding area will heat up from the new energy it is receiving. This concept is similar to magnets being pulled apart and put together. It’s hard to pull them apart but easy to put them together.