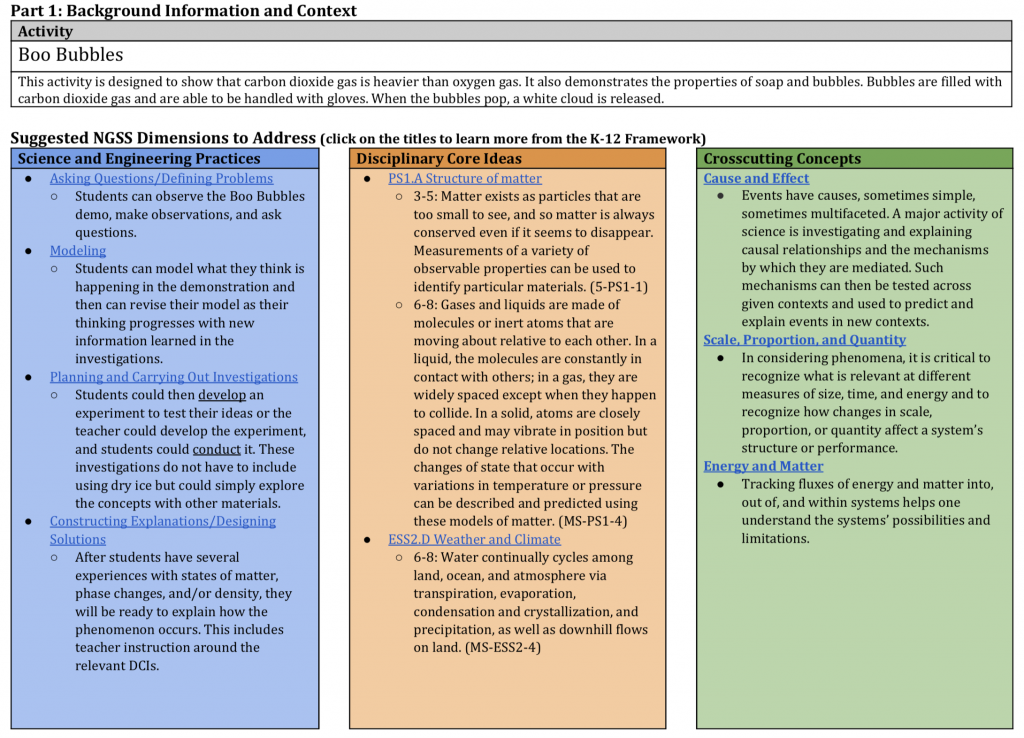 Click here for PDF
Science Discipline(s) Topics Activity Title Boo Bubbles Materials Procedure Questions Explanation PK – 3rd:  Dry ice is solid carbon dioxide and it is very cold. When it is mixed with hot water, a white gas that looks like smoke is created. When this smoke is used to make a bubble, the bubble falls because this gas weighs more than the oxygen we usually blow into bubbles. Bubbles are made of three layers, two soap layers with a water layer in the middle, like a sandwich. They take the shape of a sphere because it is the shape that has the smallest surface area. The soap layers like dirt and oil and they will pop when they come into contact with your hands. However, the bubbles can be held when wearing gloves. When the bubbles pop, the white smoke is released. 4th – 6th:  Different gases have different weights. Carbon dioxide gas is heavier than oxygen gas. When the bubble is filled with carbon dioxide instead of oxygen, it will fall instead of float. The gas is formed when dry ice is mixed with hot water. Dry ice is made of solid carbon dioxide that sublimates (turns from solid to gas) when exposed to any temperature above its freezing point. Hot water is used because the dry ice will eventually freeze the water. The bubble is formed when a layer of water is trapped between a two layers of soap. It takes the shape of a sphere because it wants to have a small surface area. The soap is attracted to dirt and the bubble pops if it comes into contact with dirt because the soap would rather be with the dirt instead of the water. By wearing gloves, the bubbles can be handled with out popping. When they do pop, the carbon dioxide gas inside cools water vapor in the air, creating a white cloud. Middle School:  Different gases have different weights and carbon dioxide gas is heavier than oxygen gas. When carbon dioxide gas fills a bubble, the bubble falls instead of floating. The carbon dioxide is obtained by mixing dry ice (solid carbon dioxide) with hot water. In Earth’s atmosphere, carbon dioxide sublimes at -109.3°, turning the solid to a gas and skipping the liquid phase. The opposite of this is called deposition, where the gas form of carbon dioxide is turned back into the solid at that same temperature. When the bubble pops, a white smoke is released. This is the result of water vapor being cooled by the carbon dioxide. It allows the water molecules to be attracted to each other, and form a cloud. Think of it like a cloud in the sky. Water is evaporated from a body of water and as it rises, it cools in the upper atmosphere. As the water vapor cools, it condenses and forms clouds. A bubble has a film around the outside that contains three layers. A thin layer of water is held between two thin layers of soap molecules. These molecules are made of a head and a tail. The head of the molecule is hydrophilic, meaning that it is attracted to water. The tail of the molecule is made of a chain of hydrogen and carbon atoms, and is hydrophobic, meaning it does not like water. When this film is formed, the soap molecules are oriented so that the hydrophilic heads are facing the water layer and the hydrophobic tails are facing away. The bubble is formed when a gas is forced through a ring containing a soap film. This changes the inward surface tension of the bubble film, which wants to stay in equilibrium with the outward air pressure. A sphere is formed because it is the shape that minimizes surface area, thus requiring a low amount of energy. The bubble keeps it shape as the bubble film’s surface tension battles the pressure of the air inside the bubble. Next Generation Science Standards