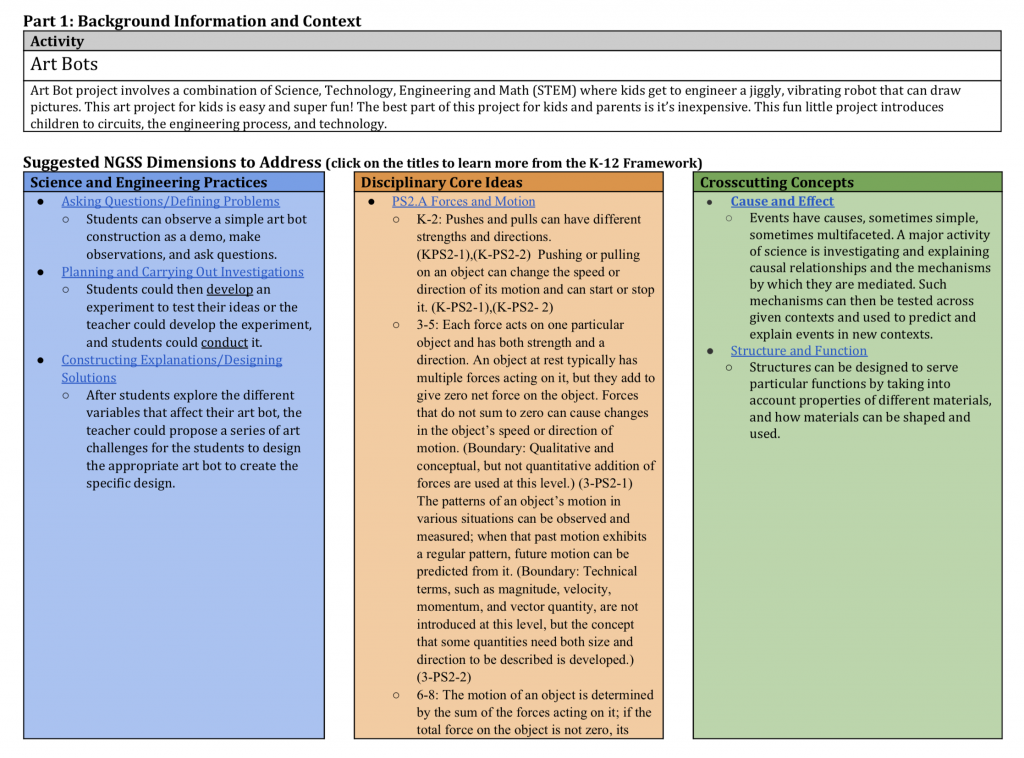 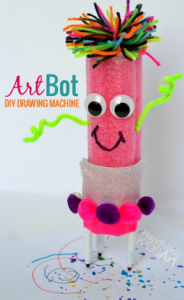 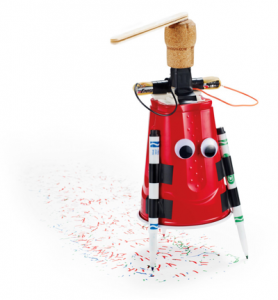 Materials Needed: • Plastic cup • Foam tape • Low-voltage DC motor • 2 AAA batteries • Wide rubber band • Electrical tape (black) • Hot-glue gun • Markers   https://www.wired.com/2012/05/ff_artbot Procedure One approach to using this activity in the classroom is to start with an ArtBot that has been partially built and to have the kids explore how to make the motor spin and the cup vibrate. They could apply the Engineering Design Process to develop a prototype and then test their prototype. The motor alone will not cause the ArtBot to vibrate–the vibration occurs when a rotor is placed on the motor shaft that is unbalanced (not equally weighted on either side of the shaft).  Kids can explore how the nature of the rotor influences how much vibration they get.  Another variable that can be examined is the battery pack and how much voltage is delivered to the motor.  A low voltage will cause the motor to spin slower than a higher voltage. With an unbalanced rotor, a slow spinning motor will cause less vibration than a faster spinning motor. Have the kids experiment and come up with their best design. Since the objects placed on the rotor do have the tendency to fly off, it might be a good idea to have the kids wear some form of eye protection. How to Build an Art Bot: 1. Turn the cup upside down and layer foam tape on the bottom (which is now the top). 2. Stick the motor onto the tape. 3. Tape the batteries end to end, positive to negative, and stick them next to the motor. 4. Wrap a rubber band around the batteries so it covers the terminals—you’ll tuck the ends of the motor’s wires under the rubber band later. Make sure everything is secure. 5. Push a cork onto the rotating shaft of the motor. Off-center weight makes the bot shake, so hot-glue some craft supplies (beads, tongue depressor) onto the cork. 6. For the bot’s legs, tape at least three markers around the rim of the cup, points down. 7. Add googly eyes, pipe cleaners, bells—whatever pleases your small person. 8. Place your robot on its canvas, put the wire ends under the rubber band, and watch a masterpiece unfold. Questions Explanation An Art Bot is a motorized device that moves in strange ways and leaves a mark to trace its path. It’s made from simple materials and is based on the idea of motion created by a little motor.