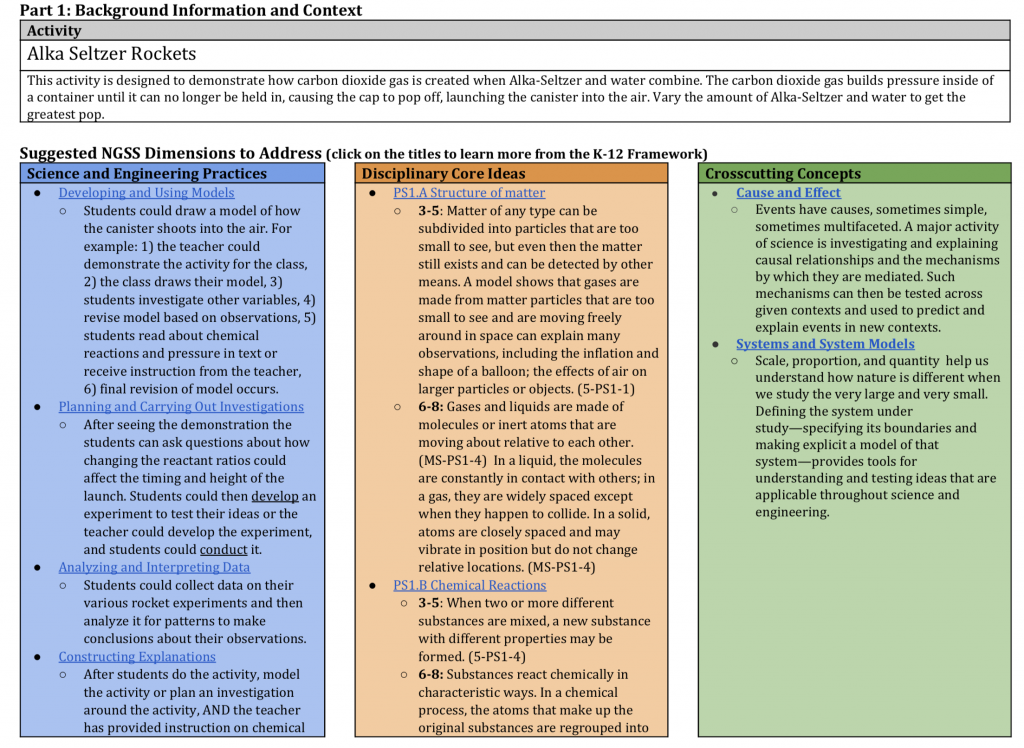 Click here for PDF
Science Discipline(s) Topics Activity Title Alka-Seltzer Rockets Materials   Procedure ***SAFETY*** The reaction causes the canisters to launch into the air. Safety goggles should be worn at all times and a safe viewing distance should be maintained. Be sure to protect head and eyes from flying film canisters.   Questions   Explanation PK – 3rd Grade: When water and Alka-Seltzer are mixed, the mixture begins to fizz and tiny bubbles of carbon dioxide are produced. When the bubbles pop, the carbon dioxide gas is released. Even though the gas cannot be seen, the gas can be captured inside the film canister until the canister can no longer hold the gas in. Lid and base are pushed onto one another but with enough pressure from the gas, the lid gets pushed off. It happens all at once resulting in a “pop” and the launch of the lid off of the base. 4th – 6th Grade: When water and Alka-Seltzer are mixed, the fizzing bubbles are a chemical reaction that causes a gas called carbon dioxide to be produced. Carbon dioxide is a molecule made of one carbon and two oxygen atoms; it is the gas that we exhale when we breathe. When these molecules are produced inside of closed canister, they build up pressure. Gases occupy space and the canister can only hold a certain amount of carbon dioxide. When the carbon dioxide has filled as much of the canister as it can, pressure has built up and the lid of the canister will pop off to allow the carbon dioxide gas to escape. The carbon dioxide pushes against the water remaining in the canister, forcing the lid off. This in turn sends the canister into the air like rocket.   Middle School: Everything is made of atoms. Bonds are formed between atoms to create molecules. During a chemical reaction, the bonds of some molecules break, allowing the atoms to form new bonds with other atoms. When Alka-Seltzer is mixed with water, a compound called sodium bicarbonate (also known as baking soda) reacts with an acid called citric acid. The reaction between these two substances produces carbon dioxide. The gas released from the fizzing bubbles is this new carbon dioxide molecule. Gases can occupy space and as the volume of a container is filled with gas, the pressure inside is increased. When there is no more space for the gas to occupy, it pushed against the water below it. This causes the lid of the canister to detach, sending water down and the canister up in the air. Next Generation Science Standards